“Zeus, first cause, prime mover; for what thing without Zeus is done among mortals?” Aeschylus, Agamemnon

In many ways, the deities or gods of your world should be treated as characters in their own right. They have their own desires, goals and abilities. These might be out in the open, such as preparing mortals for the end times, or they could be hidden goals, only revealed to those who prove themselves worthy.

On many worlds, these beings made the planet you are standing on, the stars in the skies. They may control the very air you breathe or can guide your blade to victory. Some gods even work with or against others divine beings.

Take your time with them and use the aspect tables to help fill in the blanks, or, use them as a starting point. Never be afraid to roll again or too pick a result you feel works better. On the flip side, you don’t always have to throw away a seemingly contradictory or nonsense result, as these can sometimes give you the most memorable characters, or in this case, deities.

But, if you need details, or at least, something to help jump-start your imagination and the creative process, then look no further.

Individual Deity aspects such as...

Plus 5 appendixes, all d100 tables, to help flesh out the details you may need even more

In order to download this book you must purchase it at or above the minimum price of $1.99 USD. You will get access to the following files: 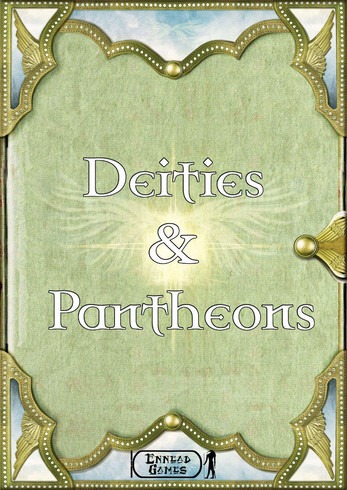